I've always wanted to write (and act, and sing and play guitar and piano in a rock band, and direct, etc.) but before that I was a reader. I still remember cracking the code and learning to read in Kindergarten. It opened new worlds to me, and I wanted to explore them all.

My favorite book as a child that remains one of my favorites today was Howliday Inn by James Howe; Bunnicula by James and Deborah Howe was and is a close second. Both books aged well, and are great for reading aloud to children.

Within a few years, I was maxing out my library card with a stack of chapter books: Nancy Drew (the newer ones from the 80s when she actually did stuff), Sweet Valley Twins, Sweet Valley High, The Babysitter's Club, The Fabulous Five, and so on. I'd be done within a matter of days, to my dad's dismay.

My dad introduced me to The Gunslinger by Stephen King when I was in fifth grade. I'd already flipped through his gruesome graphic novella Cycle of the Werewolf by the time I was nine. He even gave the library permission to let me check out adult novels, hoping it would extend the time between visits but fewer could be checked out at a time, and I still blew through King and Koontz pretty quickly as well.

It's no surprise that some of my own writing was hailed as "well written but kind of morbid," a childhood memory my husband and I strangely have in common.

The golden era was when I happened upon the YA section. Back then it was mostly Sweet Valley U (which was oddly, consistently bleak) and romance, but YA horror was a growing sub genre dominated by Fear Street by R.L. Stine (which I recognized as schlock, but still devoured) and also books by Christopher Pike and trilogies by L. J. Smith.

The trilogy format really captured my interest as both a reader and writer. So many of the books I've attempted over the years were developed as potential trilogies. There was just one huge, glaring problem: I'm great at ideas; I'm bad at finishing anything I start.

I came to two big epiphanies this year: I need to start small, and I need to go back to basics. And by going back to basics, I mean way back. The first stories weren't written. They were passed down orally. And the one thing my favorite books have in common, be it the original Bunnicula series of my youth or the Discworld books of Sir Terry Pratchett I discovered as an adult, is that they are as pleasurable to read aloud as they are on the page.


To the end of starting small, my first published work will not be a trilogy or even a novel, but a short story aptly named "Alpha."

The story began not with an idea but with a quote.

Sir Terry Pratchett once advised "Fantasy doesn’t have to be fantastic. American writers in particular find this much harder to grasp. You need to have your feet on the ground as much as your head in the clouds. The cute dragon that sits on your shoulder also craps all down your back, but this makes it more interesting because it gives it an added dimension."


I realized this was part of what made his stories so enjoyable to me and wondered if I could challenge myself to apply a similar approach. I'm not good at world building, so I decided I wanted to delve into magical realism with a story taking a ridiculous notion growing in popularity to its literal extreme.

I don't want to give too much away, but "Alpha" is the culmination of that writing experiment, and it has been selected for publishing in the WritingBloc Deception! anthology.

It's not just a start. 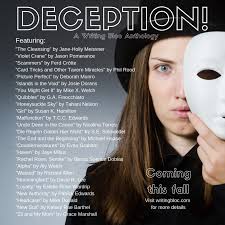 I know it looks like I've been doing the flaky ADHD thing since I haven't posted since the end of October, but in my defense, I did...